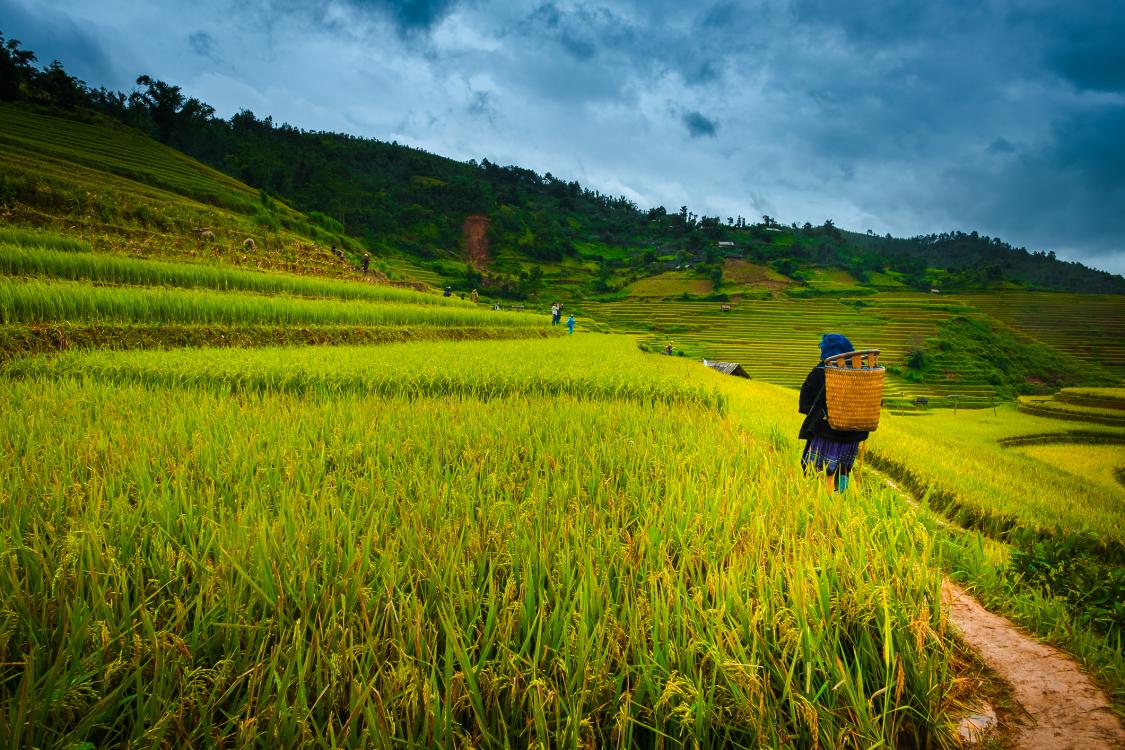 I have traveled to many places around the world as an information technology (IT) specialist with the CDC Foundation's Office on Smoking and Health's Global Tobacco Control Branch (GTCB). GTCB conducts several surveys, but I mainly provide technical support and guidance for countries carrying out the Global Adult Tobacco Survey (GATS). GATS—a nationally representative survey of adults 15 years of age or older—is the global standard for systematically monitoring adult tobacco use and tracking key tobacco control indicators. We conduct GATS using an electronic data collection system installed on tablets.

I recently traveled to the Philippines to conduct a pretest training for the Philippine Ministry of Health and the Philippine Statistics Authority (PSA). The training included five days in the classroom and two days of fieldwork. We typically do fieldwork in both urban and rural settings, but I was assigned to attend the rural fieldwork in the Castillejos municipality—a small area about three hours northwest of Manila and 40 minutes northwest of Olongapo city in the province of Zambales.

Our research team included 10 field interviewers, two field supervisors and a driver. Erma Aquino, chief of statistics for the Philippines Statistics Authority, and Mina Kashiwabaram, regional surveillance officer for the World Health Organization (WHO) Regional Office for the Western Pacific (WPRO), joined the team as well. Our goal was to interview over 50 households in the "barangay" (i.e. the village) of Looc.

We began our drive out of Manila on Saturday morning in a convoy of cars and vans. We arrived a few hours later in Olongapo at the Statistics Authority Office for the Zambales province, where a delicious home-cooked lunch was waiting for us. That afternoon we briefed the research staff, who were preparing for the next day's fieldwork.

Early the next morning, the research team drove up to Castillejos and out to the barangay of Looc. After our arrival, we met with the barangay captain, an elected official who oversees the village's finances and services, at the barangay hall. We briefed the captain on the survey, our methodology and our procedures. After the briefing, the captain gave us approval for conducting the survey. The team then dispersed among the barangay to find each interviewer's assigned households. I went with Karen, an interviewer who works for the PSA.

The first house we visited was far from the barangay hall. Our protocol requires interviewing respondents in private (i.e. just the interviewer and the respondent). However, if the respondents approved, I could sometimes sit in on pretest interviews. Our first household provided this opportunity, as the respondent immediately asked for me to join them and pulled out a stool for me to sit on. We conducted the interview outside of the young woman's home as she held her newborn baby. The respondent was very nice and offered us glasses of water, which we accepted as it was very hot that day. As I sat there watching Karen and the young woman interact, I was proud to see the efforts we've put forward to make this survey successful and the impact that it has on the interviewees. I was also in awe of the intersection between technology and rurality, and how our electronic data collection system bridges the gap.

After our first interview, we continued to the next household. Finding a house in some countries, like the Philippines, is different from finding a house in the United States because they don't have addresses as we know them. In the Philippines, we had maps of the barangays drawn by the country's statistical office—which were updated from earlier censuses or other surveys. These maps listed the heads of the households where they were located. As interviewers, we used these maps to walk the paths in the barangay to where we believed the house was. We then asked neighbors about the family name, and they finally pointed us to the right place. We did this for the next four to five hours; walking from house to house and completing interviews.

As we walked, people greeted us, and young children waved at us. I felt as if southern hospitality was present in the rural Philippines. At one point, we came across the barangay's school. As I looked inside through the school's glassless windows, I could see and hear the children doing their daily activities. What we saw wasn't like a typical school in the United States, where children of different ages are in separate classrooms. There was only one classroom, and all of the children, regardless of age, were learning together. As we worked to find the next house, we heard the children start to sing a song.

Throughout the day we continued to interview respondents on topics like their tobacco use; secondhand smoke exposure; smoking cessation; purchasing habits; media exposure; and their knowledge, attitudes and perceptions of tobacco. As I thought about the day so far, I realized how much of a difference our work makes in providing data for policymakers so they can make better decisions on tobacco control.

News gets around fast in a small village. As we continued to walk, neighbors in the area hoped we would stop at their house to interview them. From the family of 12 who lived in a mud spackled home, to the mother who recently lost her husband, we only found courteous and hospitable people. Many asked about our handheld tablets and how they worked. A small child even wanted to play with our tablet because he thought it was a game console.

We ended the day back at the barangay hall, where the caretakers had cooked us an excellent late afternoon lunch. Afterwards, we debriefed the barangay captain and left. That evening, we spent the night in Olongapo. In the morning, the research team headed back to Manila to analyze our pretest.

GTCB has a very broad scope; the world is a very large place. The goal of GATS is to get national-level data needed for each country to understand the burden of tobacco use. To do this, we visit people in their homes, throughout the world, and ask them questions; and they welcome us with open arms. It's such rewarding work. I know this work can help reduce the tobacco burden and save lives. I hope that one day I can to return to Looc and visit with the people of this wonderful area of the world. And if you are in the area, drop by; I'm sure they will welcome you, as they did us.

GTCB has a very broad scope; the world is a very large place. 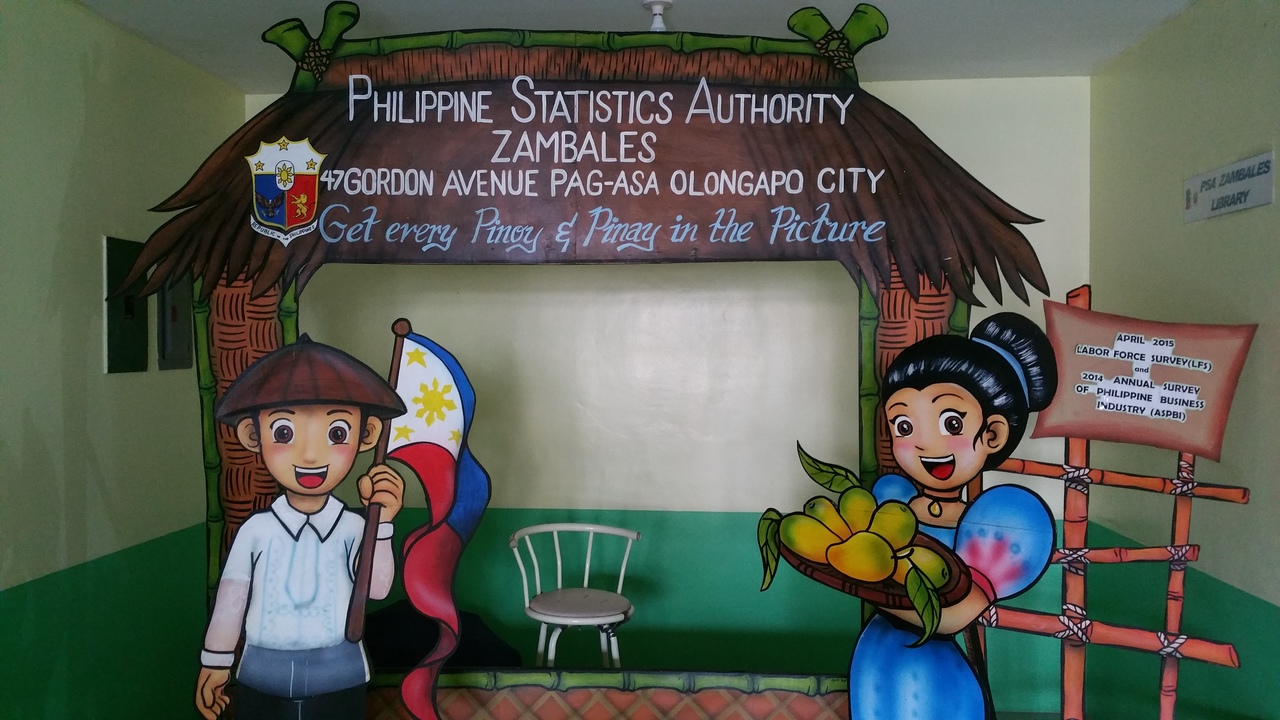 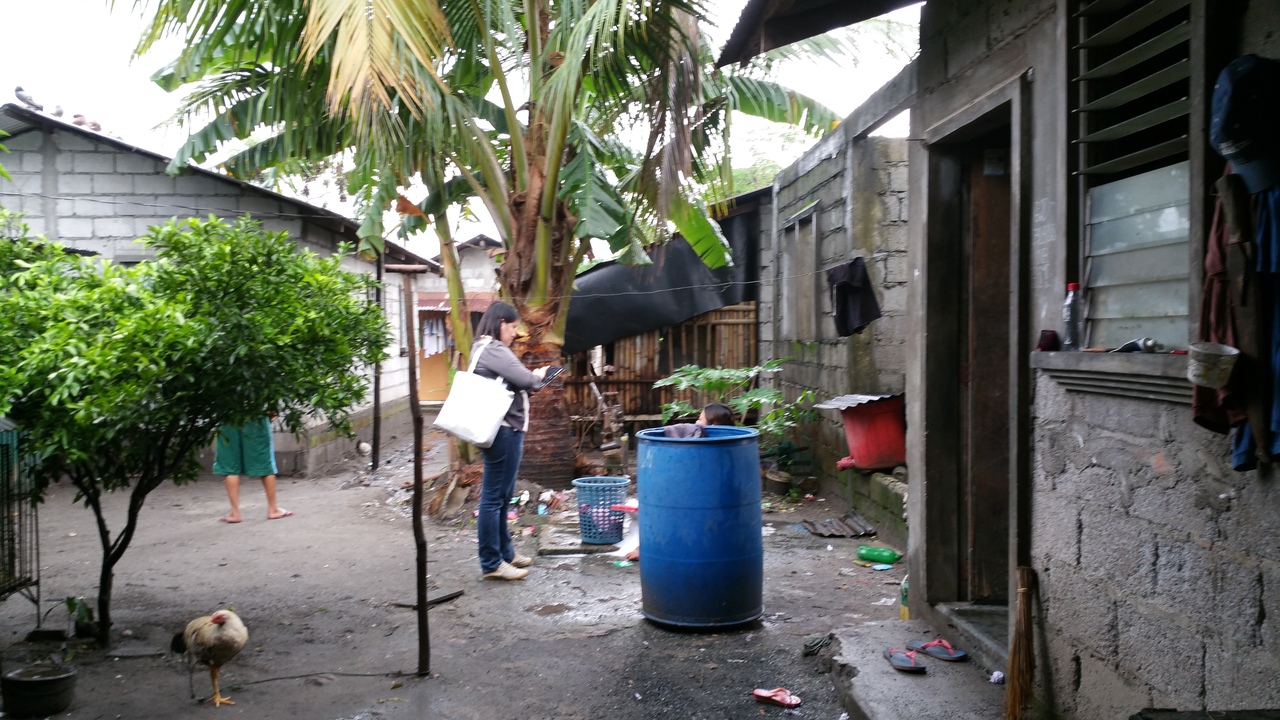 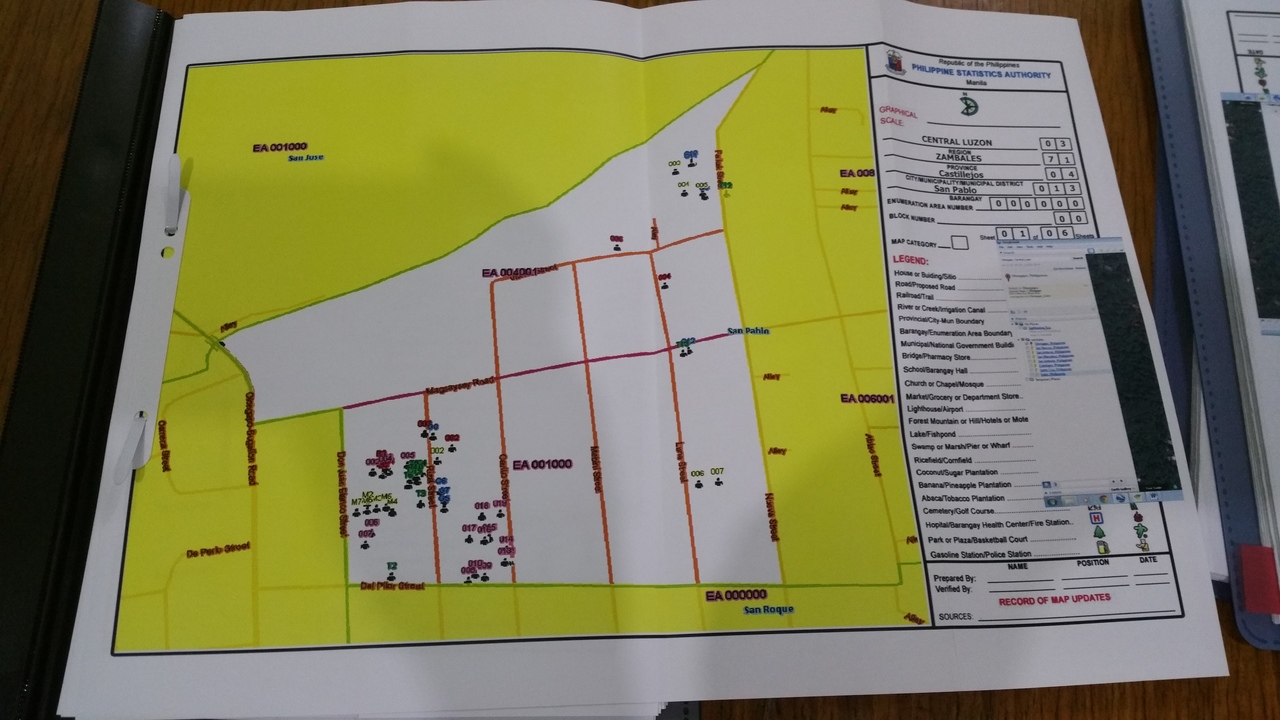 Example of a community map for the GATS pretest. 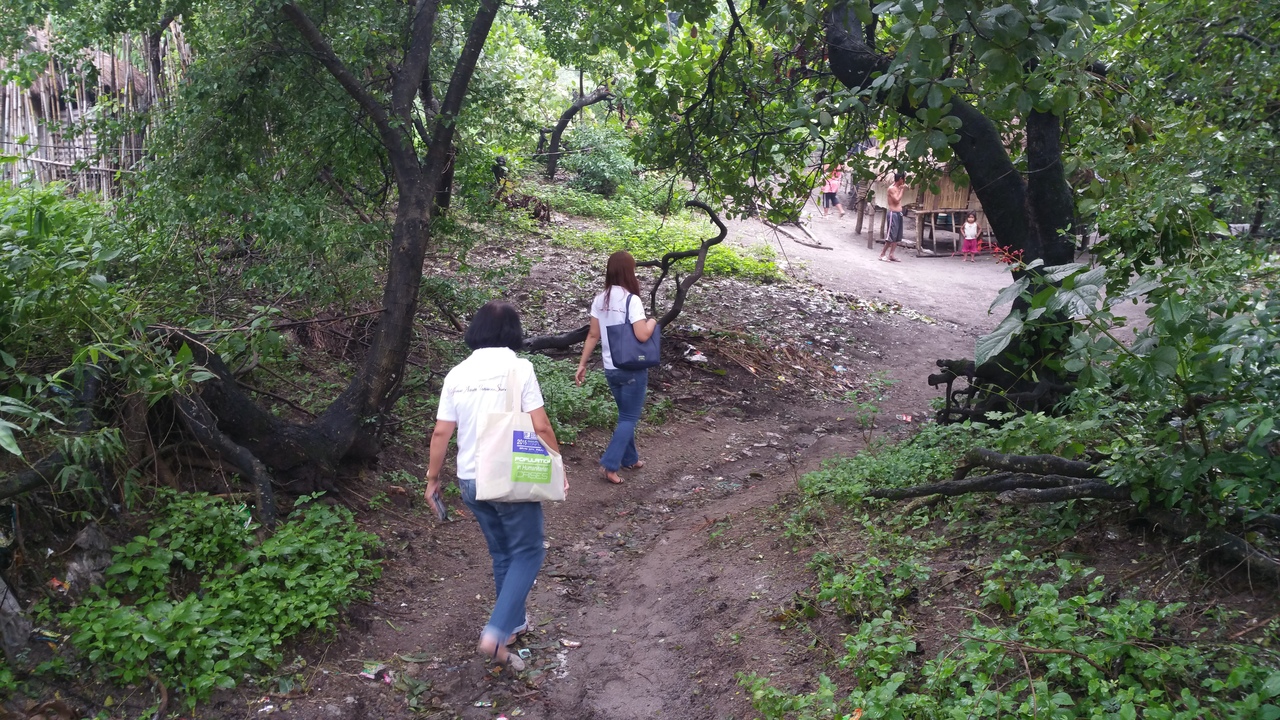 Traveling between homes during the barangay Looc GATS pretest. 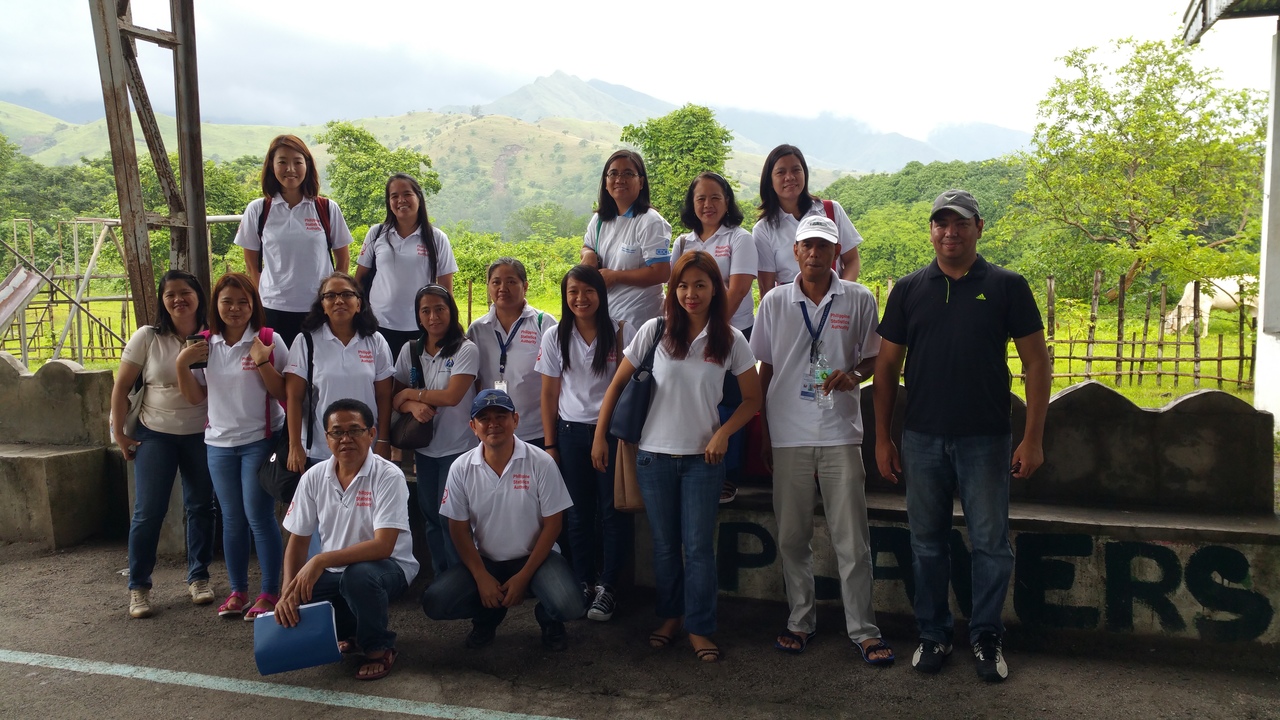 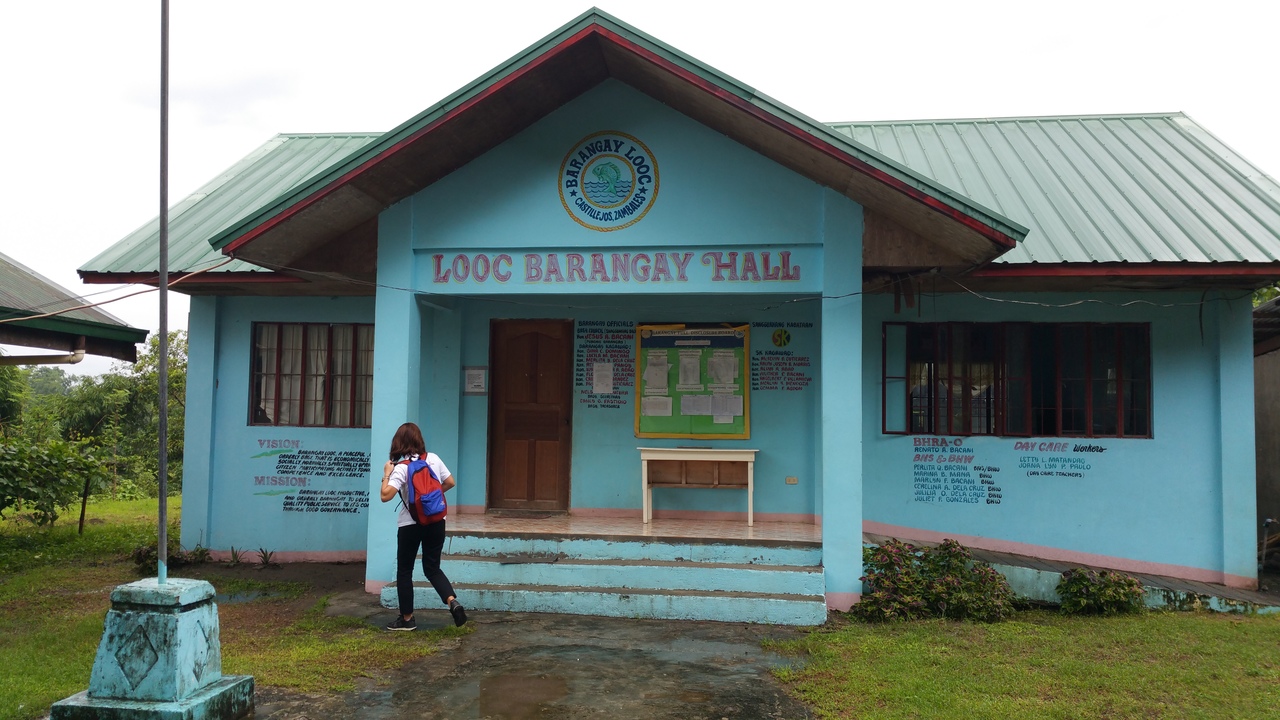 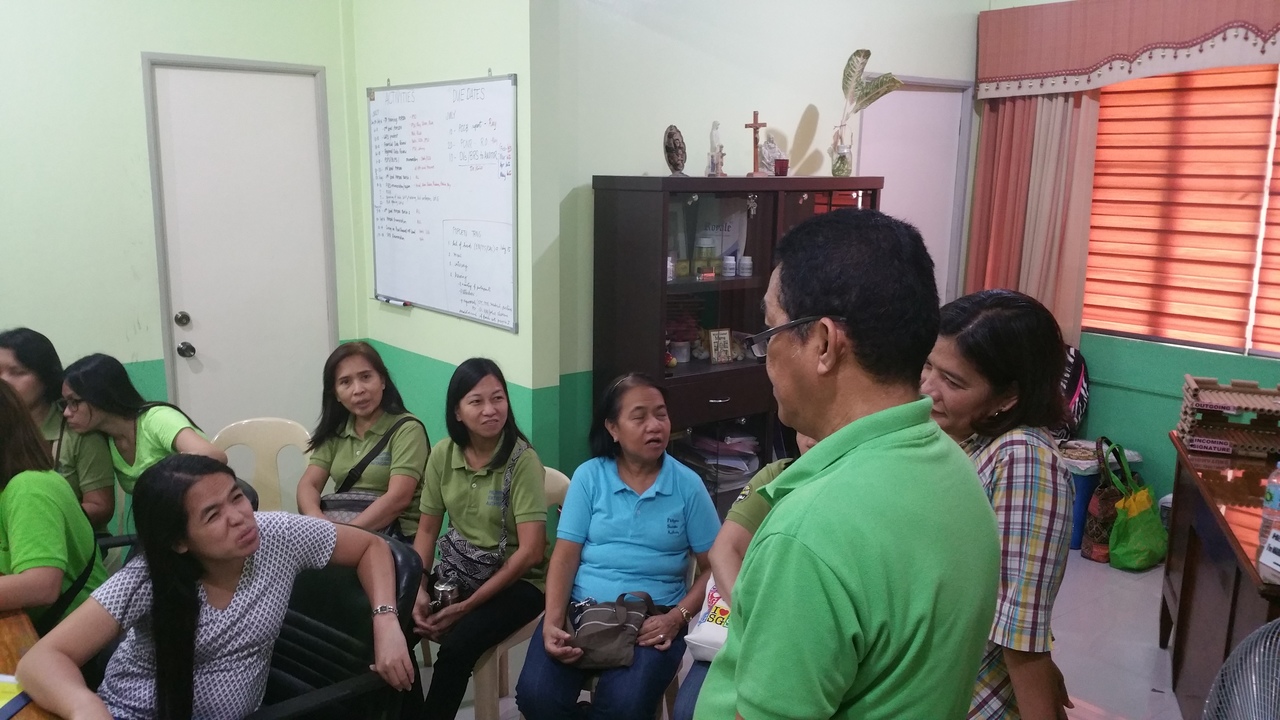